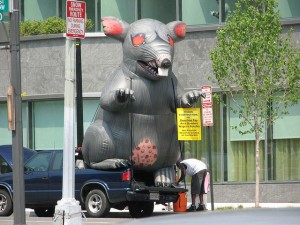 We’re all used to the ubiquitous sightings of Chihuahua-sized rats crossing our paths late at night, but Georgetown’s continuing rat problem — a population increasing since at least 2010 — is, for the moment, being eclipsed by a growing political crisis for the District fueled by surging rat populations at the Occupy D.C. protests and by statements that Virginia Attorney General Ken Cuccinelli made to Rush Limbaugh on his conservative radio show.

Cuccinelli sparked a firestorm of conservative blog activity after he alleged on Limbaugh’s Jan. 12 radio show that the District’s 2010 Wildlife Protection Act would lead to D.C. rats being exported to Virginia. Limbaugh repeated the claim last week, prompting national scrutiny about the D.C. policy enacted to treat the pesky animals humanely. (The law, in fact, does exempt rats, meaning that pest controllers can still kill them.) In response to the claims, Maryland Del. Pat McDonough plans to introduce a law to protect Maryland from any future imports of D.C. rats into the state. However, all of the recent chatter may be for naught, as The Washington Post reports that there have been no documented cases of rat-smuggling from D.C. into either Virginia or Maryland.

While the District fights off Cuccinelli’s and Limbaugh’s false claims of rat-smuggling, the D.C. Department of Health is starting a new battle against the rats occupying Occupy D.C. downtown. Last week, Mayor Vincent Gray asked the National Park Service to remove the encampments at McPherson Square and Freedom Plaza due to exploding rat populations near the sites. Protestors’ response to the threat of eviction? Georgetown rats are bigger than Occupy rats, and there is no plan to evict Georgetown residents.