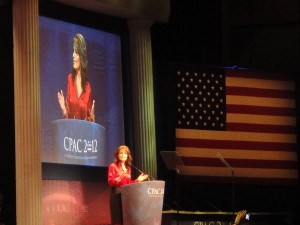 “We bought our own registration tickets and spent the day at the conference, observing events such as, ‘Why are U.S. taxpayers spending billions to promote abortion and homosexuality worldwide?'” Gina Bull (SFS ’12) said in an e-mail. ” It was a[n]…eye-opening peek into conservative ideology.”

Bull and fellow Georgetown student Rachel Nethery (COL ’12) joined about fifteen other students from local schools to attend some of the lectures at CPAC. They organized a  “mic-check” during a session on the Occupy movement but changed their plans when they realized they could hit former Alaska governor Sarah Palin’s keynote address instead.

“Mic-checks” are a tactic implemented frequently by Occupy protesters to disrupt speeches by using coordinated shouting of a phrase. Occupiers feel the mic-checks help to present alternate view points.

Although Bull did not get into the ballroom, the portion of students who managed to beat the lines got a chance to stage a protest. Check out the video from BuzzFeed here. And check out some of the lecture titles from the 2012 Program here.

Conservative writer and publisher Andrew Breitbart yelled at student protesters outside of CPAC as well. Bull sent us her video of the confrontation.