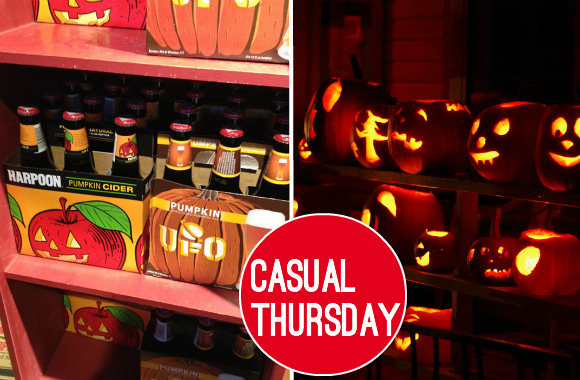 Now that fall is in full swing, pumpkin spice is impossible to escape. From lattes and bagels to soup and bread (and of course pumpkin pie), it has firmly cemented itself as the spice of the season. And because we love fall and everything that goes with it, we figured we’d play along. This Thursday, in honor of the week being (almost) over, we’re celebrating all things pumpkin.

There’s no better (or more festive) way to relax at the end of a long week than with a pumpkin beer. Almost every brewery puts out their own version, but Harpoon puts out some of our favorites. They put out two different options – a pumpkin-spiced version of their UFO (a wheat beer) and a pumpkin cider. Both are great beers, not too expensive, and can be found at our local grocery and liquor stores.

In the mood for something a little fancier than beer? Try making a Pumpkin Pie Old Fashioned with squash-infused whiskey and a syrup made of brown sugar, cloves and cinnamon. Then come share it with us.

It wouldn’t be fall without a few Jack O’Lanterns around, so pick up a pumpkin and get to carving. You can find pumpkins all over the place, from Safeway and Trader Joe’s to Red Square (Relay For Life is selling pumpkins as a fundraiser). You can go with the classic Jack O’Lantern face, or go for something a tad more extreme.

If you’d rather stick beer inside a pumpkin than a candle, you can also make a pumpkin keg for your next party. After you gut your pumpkin, throw the seeds in the oven with a little olive oil and salt for a toasted pumpkin seed snack.