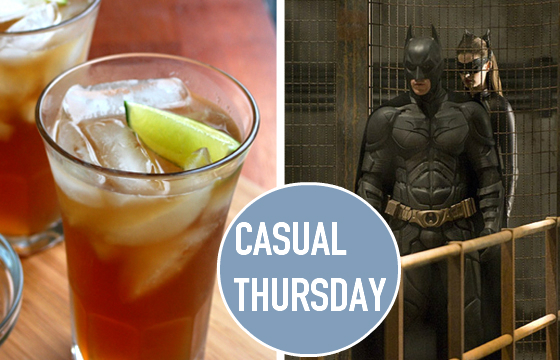 Tonight’s a special night that we’ve been waiting all summer for—the premiere of The Dark Knight Rises. So, in honor of everyone’s favorite caped crusader, today’s Casual Thursday is going to get a little batty.

The internet is full of batman-themed cocktails. Unfortunately, most of them are on a Bruce Wayne level of fanciness, and require ingredients like Crème de Violette (although those recipes are paired with a few college staples, Andre and Burnett’s, in their tutorials). If you’re feeling up the challenge, go ahead and attempt those drinks, and let us know how it goes! But we have something a little easier (but just as delicious) in mind.

A Dark and Stormy is pretty fitting for Batman, the Dark Knight. It’s spicy and sweet, and fairly straightforward. The only thing it’s missing is that deep growly voice that Christian Bale is so fond of. Bonus points for the fact that it’s supposed to storm for the next few days, so you’re set even if you’re not into Batman. 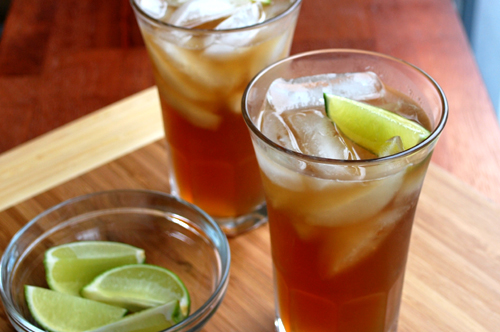 Mix everything together with some ice, and you’re good to go.

It’s probably pretty obvious that the other option today is GO SEE THE DARK KNIGHT RISES AT MIDNIGHT. If you’ve already gotten your tickets, that is. There are still a few tickets left at the Georgetown theater, jump on them while they last!

If you’re not in the mood for a midnight premiere and the inevitable costume buffoonery that goes along with it, settle in tonight and watch Batman Begins and the Dark Knight to prep for the new movie. If you want to make a game out of it, try drinking every time someone says the word “fear.” Be warned, you might not make it to the second movie.