We at 4E like to keep up with the Georgetown-themed social media pages. Georgetown University rocks an official Facebook page, Twitter profile and it racks up the likes on perfectly filtered Instagrams. Georgetown Hoyas, the athletic program’s social media moniker, does the same. You couldn’t believe the excitement the 4E bloggers exhibited while reading this tweet just a few days ago:

Students: We are looking for some new Jack the Bulldogs! If interested in being the mascot email [email protected] pic.twitter.com/PcfrQrO1xv

NEW JACK THE BULLDOG MASCOTS! Obviously, people are going to jump at the chance to represent the coolest college canine around. However will the athletic program choose? Well, we have a few ideas on how to get a Jack the Bulldog worthy enough to represent the Hoya community.

Anybody who knows anything knows that Jack the Bulldog LOVES cheddar cheese and carrots. For a new Jack the Bulldog mascot, they should definitely be able to eat their fair share of this underrated delicacy. We will accept all forms of the food. (Bonus points if cooked in an Epi quesadilla.) 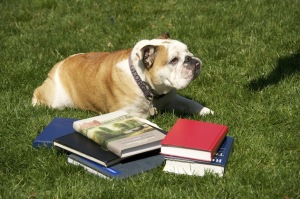 Jack the Bulldog is a smart animal. Many a time he can be seen lounging on Healy Lawn amongst the frantically studying Hoyas. Any mascot should be able to have half of this dog’s intelligence. We think a Jeopardy!-style game show would separate the true Jacks from the phonies. 99% of the questions should be about Patrick Ewing’s cameo in Space Jam.

3. Race Around the John Carroll Statue

Jack likes to hang out around Healy Circle. He struts his stuff around our founder John Carroll for hours on end. All prospective Jack mascots should race around Healy Circle to see who can separate themselves from the pack. To make it more of a challenge, the mascots need to navigate the crowd of freshman girls waiting for a Valencia-filtered Instagram on John Carroll’s lap. 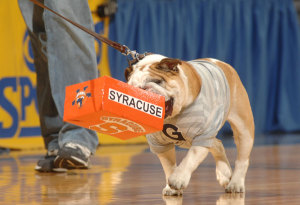 As pictured above, Jack knows how to take out the trash. To test general strength and determination, I propose a hardcore weightlifting competition. Participants should lift trash bags full of half-eaten Verizon Center chicken tenders and the tears of our opposition after a Hoya victory. 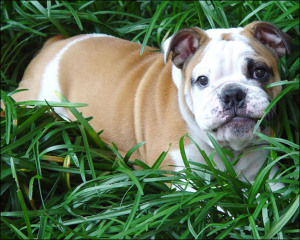 I don’t think any explanation is needed.

We propose bringing this nerd-learns-to-dance-in-arcade game back, just as Justin brought sexy back. DDR would test the prospective mascots’ stamina and flair for the art of dance. We want to see you get down with your bad selves in the student section during basketball games.

As this post should show you, if you want to be the next Jack the Bulldog rallying the student body, you better be on your A game. Not just any person can strut their stuff in a bulldog costume. So break out your running shoes and your obscure Georgetown facts. Good luck to all hopefuls!