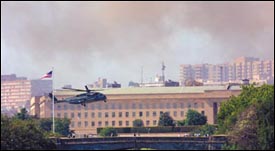 “Averting their eyes from her anguish and trying, wishing, not to hear her cries, students treaded past her and through the Leavey Center foyer. At 10:30 a.m. some went in and others went out, caught in a swell of chaos so absolute that it did not seem like chaos at all. She just stood there, her blond hair flapping with every painful shudder, her fright hand stabbing the air with a metallic cell phone. Her anger, for now, she directed at the phone. ‘I can’t get them. I can’t talk to them,’ she cried.”

So began The Hoya’s coverage of the terror attacks that shook the nation on Sept. 11, 2001.

The Sept. 11 attacks were personal for the Georgetown community, claiming the lives of several alumni. Clouds of smoke billowing from the Pentagon were visible from the Village A rooftops.

Fourteen years have passed since that incomprehensible September morning, and our understanding of the attacks and their aftermath has grown in the past decade and a half. Revisiting The Hoya’s coverage of the attacks gives us the unique opportunity to reflect on the Georgetown community’s immediate reaction to the tragedy.

A Call for Interfaith Understanding

Representatives of the Muslim Student Association penned a viewpoint (“In Time of Crisis, Americans Must Act With Tolerance,” A4, Sept. 14, 2001) expressing grief over the terror attacks and urging tolerance in the wake of the tragedy.

“While we share our fellow Americans’ sentiments of grief, loss and despair, we also find ourselves at a difficult crossroads. Like every other American, we are filled with the same fear and vulnerability that this attack has forced upon our nation. Yet we are also faced with false associations of our religion with the perpetrators alleged to have committed these acts,” the representatives wrote.

The piece referenced a number of crimes targeting Muslim Americans in the days following the attacks, including the vandalization of mosques and Muslim-owned businesses, and verbal abuse and threats aimed at Muslim women wearing veils.

Campus Ministry hosted silent candlelight vigil in Copley Crypt for students of all faiths on Sept. 12. Students also gathered that evening at a Muslim prayer service in Copley Formal Lounge and a Catholic mass in Dahlgren Chapel.

The Hoya’s pages were filled with articles about unity, uncertainty and grief in the weeks following the 9/11 attacks, but some stories stood out in their poignancy. Until mid-October 2001, the front page of nearly every issue of The Hoya, published twice-weekly, reported members of the Georgetown community missing or dead.

Georgetown Public Policy Professor Leslie Whittington, 45, was a passenger on American Airlines Flight 77, and was killed when the hijacked plane crashed into the Pentagon after departing from Dulles International Airport. Whittington was en route to Australia, where she planned to spend two months working as a fellow at Australian National University in Canberra. Her husband, Charles Falkenberg, 45, and their two daughters Zoe, 8, and Dana, 3, accompanied her.

Alumna Lisa J. Raines (LAW ’82) was also among the 64 people who died on American Airlines Flight 77. Raines was the first confirmed Georgetown graduate to have been killed in the terror attacks.

Throughout the grief, uncertainty and confusion following the attacks, a message of resilience persisted.

“Georgetown has a special role to play in the world beyond our campus gates. We contribute to the body of knowledge and public discourse as the nation seeks understanding and healing,” University President John J. DeGioia wrote in a viewpoint (“Georgetown Has a Unique Mission in Crisis,” A3, Sept. 14, 2001). “Through this reasoned dialogue and the wisdom of knowing one another and ourselves we can take our first steps in the process of rebuilding.”

The Georgetown University Alumni and Student Federal Credit Union pledged to match students’ donations to the American Red Cross Disaster Relief Fund and donated a total of $15,491 in October 2001. Over 260 students participated in a blood drive in Bulldog Alley.

Former President Bill Clinton (SFS ’68) and former Senate Majority Leader Bob Dole announced a scholarship fund for the children and spouses of victims of the Sept. 11 attacks in a Healy Hall speech on Sept. 30, 2001.

Many students participated in preemptive anti-war demonstrations on campus and in D.C., while others said that they would support the use of U.S. military force against those responsible for the attacks.

The Hoya’s Editorial Board called on students to be thoughtful and tolerant as they braved this new state of the world in a Sept. 14 editorial (“A Generation Changed?” A2, Sept. 14, 2001).

“We will be called upon in different ways than were our parents and grandparents, in ways that remain to be defined,” the Editorial Board wrote. “Oftentimes it will not be our government issuing the call. It will be ourselves, calling to each other to raise the standard of tolerance and thoughtfulness. … We also should give our lives, not through death, but through a life lived with vigorous, humane attention to the disagreements of our community and our world.”

From reflecting on experiences abroad, to analyzing academic issues, to examining science fiction novels, our summer columnists had a lot to share last year. Here is a sample of what Hoyas were writing about over the summer:

Ready for Rio, Allie Hillsbery
https://www.thehoya.com/from-tourist-to-native-in-rio/
“I’ve reached the point where I’ve stopped speaking English in grocery stores. I realized early on that eating lunch at restaurants every day was not going to work out, so now every other day I stop at the mercado for a small supply of fresh sandwich rolls. However, two times since my arrival, I have flown into a mild panic when other shoppers stopped me to ask questions in rapid-fire, heavily colloquial, to-me-incomprehensible Portuguese.”

An American Hoya in Japan, Celeste Chisholm
https://www.thehoya.com/finding-myself-where-i-couldnt-pretend-i-was-anything-else/
“Lately I notice that people here cannot help but notice me. Admittedly, there is no reason to blame them for their riveted gaze, as I fall far from the natural deviation of the average Japanese citizen, being naturally blonde, obviously American, and above all 5’11”. Out here, there is no escape from the fact that I differ in ways beyond mere physiology. Although at first a jarring sensation, living in an environment which so blatantly indicates my disparity has come to be somewhat liberating.”

Hoya Sapiens, Paul Healy
https://www.thehoya.com/reconsidering-the-humanities-crisis-part-i
“Over the past year, the humanities have come under close scrutiny in our public discourse. Last summer, Harvard release a report that showed a decline in enrollment in humanities majors. In January, President Obama took a shot at art history majors in a speech on education and the job market. All the while, voices in the national media have both questioned the value of the humanities and lamented their decline. First, what do we mean when we talk about the humanities? And what sort of crisis is happening?”

Back to Futures Past, Hannah Kaufman
https://www.thehoya.com/23002511/
“As I was reading ‘The Hitchhiker’s Guide to the Galaxy,’ a weird fictional book, ‘Encyclopedia Galactica,’ kept popping up in my mind. Intrigued, I decided to do a random Google search to see what would turn up. Lo and behold, I discovered that this fictional book actually originated from another fictional sci-fi series that began with the novel ‘Foundation.'”

What do you want to speak up about this summer?

Applications to be an online summer columnist for The Hoya are due Thursday at midnight. Visit https://www.thehoya.com/join-the-hoya to apply!

‘Twas the night before the Map final, when all through the Hilltop,
Nervous SFS freshmen were studying, though they wished they could stop.
Their Sporcle quizzes were aced, all filled out carefully,
From Armenia with Yerevan, to Rome in Italy.

College, NHS and MSB kids were nestled, all snug in their beds,
No visions of wind patterns danced in their heads.
And you with your Atlas and I with my notes,
Were readying our brains for whatever exam JRA wrote.

When down on Healy Lawn there arose such a clatter,
I rushed from Lau to see what was the matter.
Out to the lawn I flew like a flash,
And breathlessly asked if this was about Map class.

When what to my exhausted eyes did appear,
Well, I don’t go to lecture, but I think that’s the professor standing here.
In a downpour like the summer monsoons, his capitals they came,
And he shouted with glee as he called them by name:

“Now Belize has Belmopan, now Hungary has Budapest,
On Angola with Luanda, on Romania with Bucharest!
From Russia’s long history to Greece’s financial descent,
You must know it all – er, at least 70 percent!”

So away to the files of lecture captures I flew,
To learn geographical features and geopolitics, too.
As I drew on my maps, my mind was spinning around –
We have to know rivers and seas, too? Are there no bounds?

Ukrainian elections ran through my head,
And I realized that tonight I wouldn’t be going to bed.
Reardon-Anderson, meanwhile, went straight to his work.
“What time is it in Manama when it’s 7:00 in New York?”

“In the United States South, how do voting trends go?”
“In which direction do the Trade Winds blow?”
“What are the similarities in the conflicts in Nigeria and Sudan?”
“Why does the US need to maintain relations with Kazakhstan?”

And he displayed iClicker questions up on a screen,
Then showed us the right answers, lit up in green.
Then he left Healy lawn, and went toward Red Square,
I stood all alone, feeling so unprepared.

But I heard him exclaim, as he walked to the ICC,
“The subtropical highs are north and south of the equator at 30 degrees!”