Without further ado we present to you Doggelganger.com, a stunning waste of technology dedicated to matching your face to a dog’s. For those of you who have ever wondered what breed your roommate would be or are hoping to someday adopt a pooch with a matching pout, this is the procrastination destination for you. Here’s how it works: you  take a picture with your laptop camera or upload one from your computer, send it through the matching software, and then share the results to your little heart’s content via the twitmachine or Facebook. Easy! Fun! Not physics homework! Note that this is no Emergency Compliments; after getting paired with a chubby bulldog three times in a row you might find yourself re-evaluating why you spent Valentine’s Day with Ben and Jerry.

The best part about this procrastinator’s dream is that all the dogs used by the site are up for adoption, so if you fall in love with a puppy that looks like you (this seems a little narcissistic but we won’t judge), you might just be able to adopt yourself a new best friend (though not if you’re a freshmen in the dorms; just start with a fish, kids).

There comes a time in every young Hoya’s life when, after a series of stunning beer pong victories or Macho Man dominance, one begins to question whom to thank for prodigious drinking abilities. Should you praise the benevolent gods after a flawless shotgun? Perhaps you should pour one out as a gift for Irish ancestors watching from the Great Pub in the Sky? Maybe you have no one to thank but your own sweat and tears, blood and pain, puke and rallies (Editor’s Note: I call it a ‘Boot and Re-boot’) that have made you the champion you are today. These, friend, are the questions that haunt our walks to Rhino.

Luckily for us, the brave men and women of science have resolved to take this mystery back to the tap, er … I mean, source. In a study presented last week to the American Association for the Advancement of Science (oh yeah, nod and smile like you’re on their email list), Stephen Benner traced the ability to process alcohol back to a common ancestor between humans, chimps and gorillas; an ancient relative that got tipsy 10 million years ago.

Here’s the story: When some primates decided to get off their high horses (trees) and start spending time with the terrestrial folk, fruit that had been fermenting on the ground became a viable snack option. Fermentation turns sugar into ethanol, and ethanol is then digested by a special enzyme in your esophagus, stomach and intestines. As ethanol is the type of alcohol found in beer, wine and spirits (a generous term for the crap you buy at Wagner’s), having an enzyme that can metabolize it is crucial to the success of your Mason Inn adventure. So how did these tricky scientists figure it out? They started by comparing ADH4, the enzyme humans have for ethanol breakdown, with the versions of this enzyme found in other primates. By mapping the genes corresponding with the enzyme onto the primate family tree, they were able to see that a functional version of ADH4 (aka the ability to handle ethanol) appears on the branch that leads to chimps, gorillas and even that drunk girl throwing up in John Carroll’s lap.

So next time you emerge from a pregame standing tall and walking (almost) straight, take heart in the fact that a 10 million year old ape with a taste for rotten fruit is smiling down on you; after all, you and your enzymes are living out his legacy. 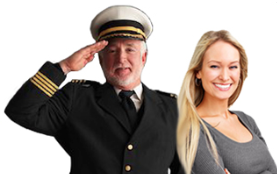 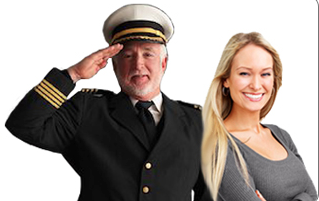 The big V-Day is approaching, and you’ve already got some strikes against you: maybe you haven’t seen the inside of Yates since your flu shot. Maybe your idea of flirting is asking her to watch your stuff at Lau. Maybe midterms are making your face experience levels of acne activity unheard of since middle school. Maybe the closest you’ve come to a DFMO is someone shoving you as you try to buy yourself a VodCran at Rhino.

Hopeless Hoyas, rejoice! No matter how pathetic February has had you feeling, hold on to one simple truth: You’re So Much Cooler Online. In this day and age of excessive social networking, there truly is a dating website for everyone, and with a touch of shameless lying and a fair amount of Photoshop, you too can land yourself a date in time for Thursday. Without further ado, our favorite dating websites of 2013:

Looking for someone who will stand by you through the rough waters of life? Hoping for love as deep as the sea? Got a thing for old men with scruffy white beards? Connect with fellow captains (still unsure how liberally this label is applied) for smooth sailing this Valentine’s Day!

If you consistently rank yourself between 9.5 and 10 and for some strange reason are still looking for a date ONLINE (hint hint: you might be wrong), this is the place for you. Darwin Dating uses their own dubious definition of natural selection to ensure all you beautiful specimens are separated from the “ugly, unattractive, desperate fatsos.” (ouch)

The Ugly Bug Ball Dating for the Aesthetically Average

In marked contrast to Darwin Dating, this website is for the Hoyas with slightly more realistic outlook. Let’s face it, its February 12th, and you’ve eaten 6-plus boxes of Sweethearts that your roommate’s boyfriend sent her (oops). At this point, it’s about taking what you can get.

Singles With Food Allergies Share More Than a Meal

Celiac? Lactose intolerant? Allergic to nuts? Get away from those toxic friends that make fun of you for getting gluten-free bread at Leo’s and find a soul mate who can sympathize with the swelling and itching. Nothing says love like a shared autoimmune reaction to pollen.

If this pretty much sums up how you are feeling econ lecture today, take solace in the fact that there is an entire (online) community here for you. So skip the Dixie run this week and start your search for a single who can carry on an interesting conversation sans-Burnetts.

Note of Caution: Beware the Manti Te’o Syndrome. As in, make sure your new love is a real human being before investing too much time/emotion/national publicity. 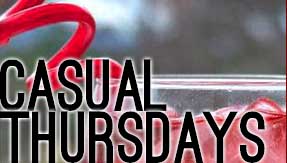 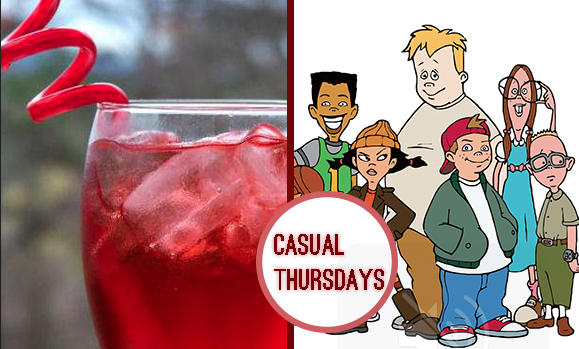 Looming midterms hurting your soul? Cold and clouds keeping you ghostly pale? Constant name changes on Facebook reminding you of your lack of internship? The drab days of early February remind us all that we’re not getting any younger (or thinner, for that matter; the winter Velveetas are quickly becoming a threat to that spring break bod), so set down the history reading you were erratically highlighting and join us on a trip down memory lane.

Our drink selection this week harkens back to the simpler days when evolution was for Pokémon and “psych!” was but a harmless interjection after a prank. When computer labs were for Oregon Trail and that weird bug game (you feel me early Macintosh users). When study abroad meant meeting Lizzie McGuire’s twin in Rome and when an unlimited frozen yogurt machine sounded like something straight out of Zenon instead of the basement of Leo’s. So put on Aaron’s Party and invite the crew over for a good ole fashion ’90s pregame.  Because, really, who wouldn’t want to pollute their cherished childhood memories with cheap vodka?

This week’s game is a fresh take on an old favorite (read as: adjusting a beloved American classic to fit the demands of an ever-thirsty college student). In an effort to keep things simple while facilitating humiliating photo opportunities, we present, for your pregaming pleasure, Drinking Charades.

(Also known as the Dirty Shirley. But Shirley was the name of my middle school librarian and I feel uncomfortable about it so we’re sticking with this, eh?)

1. Pour soda and vodka into a cup

3. Top with a cherry if you’re sophisticated. Makes 1 serving.

General Rules (you should already know these):

-Divide your party into two teams.

-On scraps of paper (a.k.a. that stats assignment you never turned in), each player should write down places, things, movies or people to be acted out.

(Note: if you are exceptionally lazy/uncreative, there are smartphone apps to generate charades suggestions.)

-Place all of the cards (a.k.a. paper scraps) in a bowl/hat/solo cup/empty Wisey’s container, and have the teams alternate sending players to act for the team.

-Each actor has 30 seconds (or however long you decide) to try to get their team to correctly guess the card. ACTORS CANNOT MAKE ANY NOISE. This includes talking, humming, grunting, moaning, sniveling, etc.

-If the actor’s team fails to guess correctly, the other team has ONE chance to guess.

-Tally the number of correct guesses for each team, and when you run out of cards, whoever has the most points wins!

-If you wish to switch the card you choose with another from the bowl, take a big swig.

-If a team fails to guess correctly, the actor takes a big swig.

-If a team guesses correctly, the entire opposing team takes a big swig.

-If you blurt out an answer when it is the other team’s turn to guess (a.k.a. during the performance of an opposing actor), take a shot.

-If you make noise while being an actor, first, remind yourself that you are indeed playing CHARADES, and secondly, take a shot.

-When all the cards have been used, the team with the least number of correct guesses finishes their drinks. 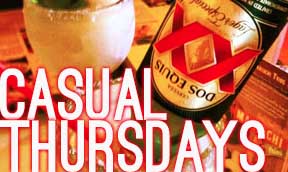 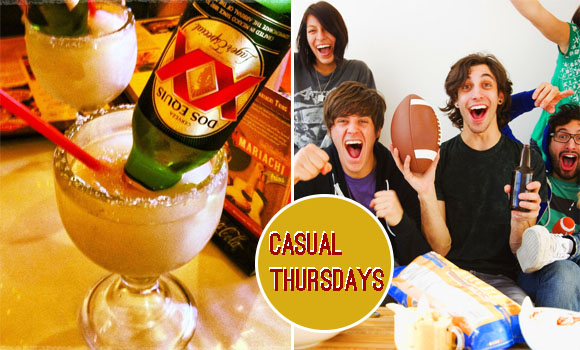 As we wipe the last tears from our eyes and look towards a weekend without Thirds, a new chance to be day-drunk mid-semester graces our Sunday: Super Bowl XLVII. Hope springs eternal. What time is it at? Not sure. Where does it take place? Couldn’t tell you. Who’s playing? Thank heavens for Google. But fear not! Whether you take a special pride in gloating about fantasy victories or meticulously plan your bathroom breaks to miss the game, not the commercials, we can all unite in the simple pleasure of drinking cheap beer and pretending not to double dip in the community salsa. Cheers.

Now if the thought of sipping on lukewarm Natty all evening makes you cringe (you snob) or if you just need something a little stronger to get you through that three-hour pregame show, why not complement those chips and (expired?) guac with a Beer Margarita? (Note: this sounds like something desperate college students would make, but take a good hard look in the mirror buddy. Necessity is the mother of invention.)

And If watching large, scary (let’s talk about Ray Lewis’s helmet) men repeatedly running into each other doesn’t quite hold your attention, we have a game that will.