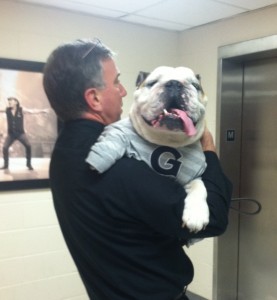 After hearing last week that Jack the Bulldog had injured himself while jumping  on the couch, we worried about the health of our cutest mascot. Jack visited an orthopaedic surgeon earlier this week, and according to his caretaker Fr. Steck., has torn 50-70% of his ACL. Luckily, there’s no indication of arthritis or damage to Jack’s meniscus.

Jack will eventually need surgery to correct the injury, but because it’s only a partial tear it’s not immediately necessary. Because Steck will be traveling over the next few weeks, the surgery will take probably take place the second or third week of April. Depending on what type of surgery Jack undergoes, recovery will take anywhere from 2-3 months.

In the meantime, Jack won’t be around campus as much as usual. He’ll be taking short walks around the Jesuit Residence and the Southwest Quad. If you see him, go ahead and give him a scratch behind the ear (he also likes butt scratches, but nobody will judge you if you don’t want to go there).

5 Replies to “An Update on Jack the Bulldog’s Health”