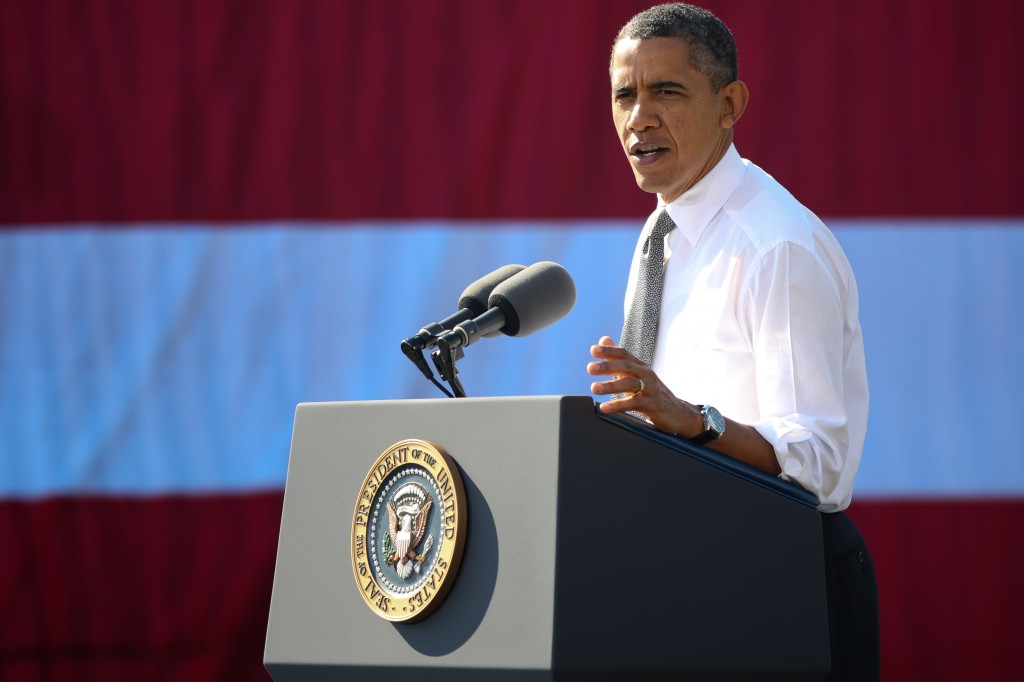 You can’t watch the NFL Playoffs every night, I guess. The State of the Union address provided some quality primetime viewing on the otherwise non-event Tuesday night television schedule and we hope you tuned in. Why? Well, because it kinda sorta might have been the most important speech Mr. Prez has given in quite some time.

Gabrielle Giffords,Arizona Congresswoman and victim of last January’s horrifying shootout, made an emotional appearance at the State of the Union address last night. She entered only minutes before the President and inspired a standing ovation.

When President Obama did enter, after wading through aisle after aisle of Representatives who clamored for camera air time,  he made his way towards Giffords and gave her a hug.

Giffords will be stepping down from her post this week  to focus on recovery. “Every day I am working hard. I will recover and will return and we will work together again for Arizona and for all Americans,” wrote Giffords in her letter of resignation.

SEAL TEAM 6 DOES NOT GET OLD

Soldiers got a lot of play in the speech. Obama mentioned the troops being pulled out from Iraq and Afghanistan as well as discussed the heroic actions of SEAL Team 6 who killed Osama Bin Laden this past year and fostering jobs for Veterans.

Other topics Obama hit on were jobs, energy, innovation, regulatory practices and immigration.

Student debt made the speech, edging out other hot button issues like gay rights and D.C. statehood.

” When kids do graduate, the most daunting challenge can be the cost of college.  At a time when Americans owe more in tuition debt than credit card debt, this Congress needs to stop the interest rates on student loans from doubling in July,” President Obama said before calling to extend the tuition tax credit and calling to double the number of work-study jobs in the next five years.

President Obama also addressed the endemic issue of as he put it, “skyrocketing tuition.” Anyone who’s eyed the increasing cost of education on their own Georgetown bills can attest to that. Obama did not give a concrete way to change that but asked states to make university’s a priority. “If you can’t stop tuition from going up, the funding you get from taxpayers will go down,” Obama said. “Higher education can’t be a luxury -– it is an economic imperative that every family in America should be able to afford.”

AND TO THE GOP

Taking the charges of ‘class warfare’ head on, Obama claimed to come at the issue of wealth inequality from a common sense perspective.

“Now, you can call this class warfare all you want.  But asking a billionaire to pay at least as much as his secretary in taxes?  Most Americans would call that common sense,” Obama said, directly taking a swipe at Romney’s tax returns.

Among other little jabs, Obama might have been thinking of Mitt Romney’s surrogate, New Jersey Governor Chris Christie  during the portion of the speech on teachers. “Teachers matter.  So instead of bashing them, or defending the status quo, let’s offer schools a deal,” Obama said. Christie has been floated as a potential Vice Presidential pick for Romney and in New Jersey has had contentious relations with the state’s teacher’s unions.

He was not all negative though. In fact, he borrowed a Jon Huntsman campaigning staple phrase ‘deficit of trust’ when describing the relation between the Main Street and Wall Street.

President Obama had an ‘old dad moment’ during the speech when he made a pun about spilled milk.

“We got rid of one rule from 40 years ago that could have forced some dairy farmers to spend $10,000 a year proving that they could contain a spill — because milk was somehow classified as an oil,” Obama said. “With a rule like that, I guess it was worth crying over spilled milk.”

Hyuck, hyuck, hyuck. Knee-slapper if I ever heard one.

You could almost hear the collective groan. And you certainly could read it on Twitter. Political journalists and commentators almost unanimously panned the remark with a chorus of “Ugh”s and “Yikes”s.

Check out the Buzzfeed’s aggregate of notable twitter responses here.

Okay, seriously, my little summary does not suffice. Watch it for yourself here if you missed the live broadcast.

Also, all week, the White House will be taking questions on the address and hosting a special Google+ ‘Hangout’ (Gosh, I hate that Google+ calls it that…) with the POTUS himself on January 30th to answer questions.