Georgetown might be known for its incredible basketball program, but that didn’t stop one baseball great from swinging by this week for a tour. That phenom was none other than New York Yankees third baseman Alex Rodriguez, who spent about 90 minutes on the Hilltop on Tuesday touring the campus.

Rodriguez was accompanied by an assistant and by Mex Carey, the Assistant Athletic Director for Communications at Georgetown. He also took time to meet Georgetown Basketball players L.J. Peak (COL ’18) and Bradley Hayes (COL ’16). 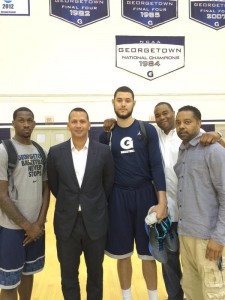 A-Rod’s tour was given by Justin Kotwicki (COL ’17), who works at the Office of Undergraduate Admissions (and also for The Hoya). 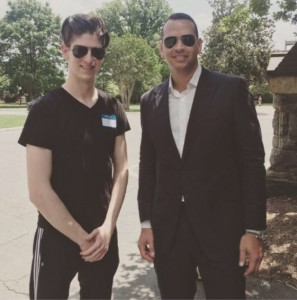 “Yesterday morning my boss, Berkley Braden, comes and tells me that Alex Rodriguez is going to be on campus and he needs a tour guide. She asked if I would do it and without hesitation I said yes. Perks of working 9-5 over the summer, I suppose,” Kotwicki said.

It’s no secret that the Yankees slugger has an affinity for college campus tours, and according to Kotwicki, A-Rod expressed an interest in Georgetown’s legacy and “all of the random historical fun facts” it holds.

“The conversation was focused on the history of the school, the countless legends that students have come up with over the years, student life and most importantly, our mutual love of the show Homeland,” Kotwicki said.

And of course, no tour with A-Rod could be complete without a little talk about baseball.

“We immediately bonded over our baseball backgrounds,” Kotwicki said, “he being the 14-time All Star with the fourth most homeruns in the history of the game and myself having been the 2nd string left fielder on the 2008 Crofton Cardinals Little League baseball team that scored a grand total of three runs during my tenure. We had a lot in common.”

All jokes aside, A-Rod went largely unnoticed on his campus tour. “Some people would give us that ‘I know I know that face’ look, but not once did we get stopped for a picture or autograph at any point throughout the tour,” Kotwicki said.