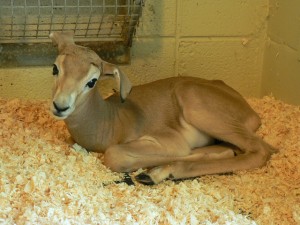 The National Zoo welcomed a new baby gazelle into the world last weekend. And as The Hoya’s official baby animal lovers, we can’t wait to introduce you to the most adorable baby dama gazelle on this side of the Potomac. This male baby was born on September 4 in an off-site exhibit and will remain off-site for several weeks while baby and mother Fahima bond together.

Dama gazelles are found in the Sahara Desert and grasslands to the south, but are critically in danger. According to the National Zoo’s press release on Flickr, there are fewer than 500 specimens left in the world.

The baby, so far unnamed, is the second dama gazelle born at the zoo this year, but the first, who was born in July on exhibit, died when he was 13 days old. Fortunately, this baby appears healthy and active and is gaining weight while bonding with his mother.

The two will become available to the public later this fall at a mixed species exhibit, where they are housed with other dama gazelles and two scimtar-horned oryx. For more photos of this newest addition to the zoo, check out the National Zoo’s album on Flickr.

One Reply to “A New Baby Animal at the Zoo”