If you haven’t read my friend Emily’s original post 5 Reasons Georgetown Students are Ron Swanson, please do. She’s hilarious and the “Drunk Ron Swanson” gif is life-changing. That being said, I’m going to have to respectfully disagree. As an avid fan of “Parks and Recreation” and a meat enthusiast, I’m going to go out on a limb here and say Ron Swanson would never put his coveted stamp of approval on the Georgetown lifestyle. Here’s the evidence to back my claim up.

60% of the Georgetown population identify as government majors, according to a statistic I just made up. They’re everywhere. It makes sense because we live in the nation’s capital with so many amazing opportunities to intern on Capital Hill. Impressive, right? You know who doesn’t care about any of that? Ron Swanson.

4E likes to consider itself the voice of the people, only slightly funnier and much sassier. So we write about Burnett’s and Leo’s. We give the people want the they want. As college students, the options for weekend liquid consumption are limited by our empty wallets and nonexistent credit scores. So we don’t complain when a Vil A only has Natty’s and Burnett’s. It’s expected. It’s understandable. You know who doesn’t understand? Ron Swanson.

We like to consider ourselves a fairly healthy campus where Lululemon pants and organic lettuce purchases from Whole Foods run rampant. WE LOVE VEGETABLES. In fact, it is difficult  to go a day without seeing one of the paper SweetGreen bags. We love the stuff. How could you not? They use the freshest ingredients and the most filling bread.  Also, it was founded by 2 Georgetown students so it’s a win-win, right? Let’s see what our good friend Ron Swanson has to say about this. 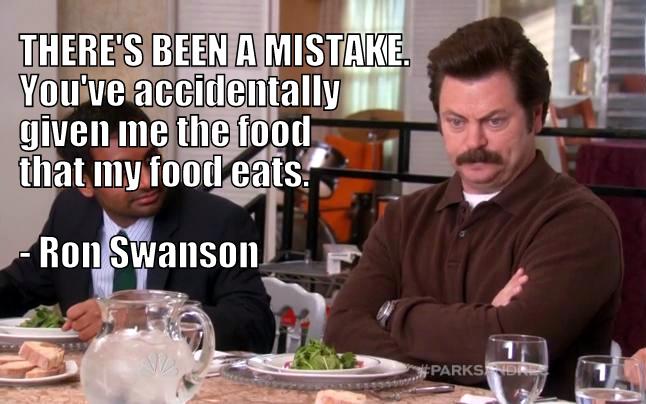 Running in a similar vein, I wonder what Mr. Swanson’s personal statement on exercise is…

Guys we rock at social media. Post it on Facebook. Tweet it. Instagram it. BLOG it. We’re there. It’s kind of our forté outside of procrastinating and subsequently stressing out about how much we procrastinated. Georgetown was actually ranked #1 in social media influence out of colleges in the DMV area. You know who sucks at social media? Ron Swanson. It’s actually kind of sad as evidenced by the selfie he accidentally vined. #Basic

Stay gold, Ron Swanson. Keep fighting the good fight against the establishment, vegetarianism and technology. It’s a fight you’re sure to win.