January 20th has come and gone, and Inauguration weekend has commenced. What does that mean? Only that 3 Doors Down has risen from the dead! If you don’t know who they are, don’t be surprised. You’ve probably spent your entire life unconsciously avoiding them, as one Twitter user explained. Their most famous song “Kryptonite” isn’t the worst, but honestly it probably belongs where I found it: middle school. At this point, I would almost rather do anything than jam to my middle school tunes, but the following situations made the top of the list.

I promise this is the most heartbreaking sound on here.

2. The Sound of My Own Voice

Have you ever heard your own pre-recorded voicemail? Count yourself lucky if you haven’t. It is one of the worst sounds you’ll ever hear, but I’d still prefer it to 3 Doors Down.

Honestly, this might have been a better choice because the Inauguration was on Friday. And in the wise words of Rebecca Black, “Yesterday was Thursday, Thursday/ Today it is Friday/ . . . We gonna have a ball today.” There was an Inauguration Ball Friday night, after all. 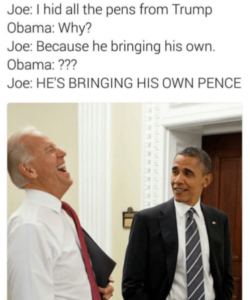 We’re now losing our favorite meme. At least this song can honor that. Also, it’s #5 in the Australian Top 50, so there’s that.

5. Paolo from The Lizzie McGuire Movie singing “What Dreams Are Made Of”

SING TO ME, PAOLO.

If you squint kinda hard and close one eye she almost resembles Hillary Clinton!! I would definitely listen to this horrific song over “Kryptonite” if I could see Dr. Jean perform it.

After listening to everyone under 13 blast this song at the pool this summer, I’m honestly tired of it. It’s pretty autotuned, but at least it’s kind of catchy.

This song was great when it came out, but it is so overplayed that I honestly cannot hear it one more time. But when faced with the choice of 3 Doors Down or “Let It Go,” I’ll stand in the light of day and let the storm rage on. The song never bothered me anyways. (Side note: fun inauguration remix here)

9. Watch all of the Buzzfeed Unsolved videos alone AND in the dark

This is the scariest possible thing that I could think of.

10. “Amigas Cheetahs” by The Cheetah Girls

Honestly this song isn’t even a problem. I found it in my iTunes folder and it’s just beautiful. I would definitely go to the concert if they were there. 11/10 would recommend.

I hope that this gave you a laugh or at least gave you some ideas of what to listen to instead of 3 Doors Down!